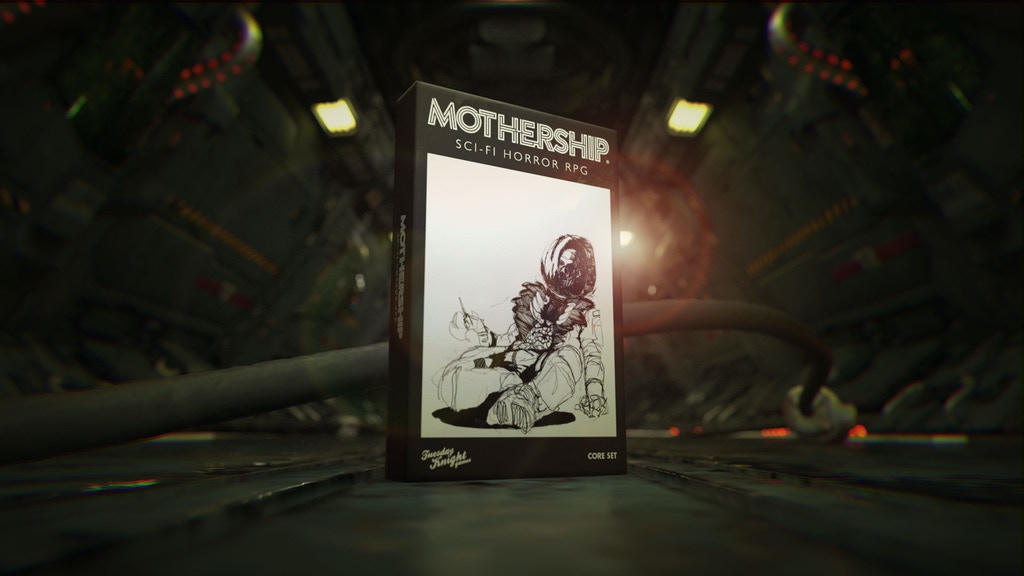 Sorry for the missed update in May, me and the family got COVID which really knocked us out. I’m just now catching up. Thanks for your patience.

Here’s what’s going on in the Motherverse:

Below is some of the rough layout for Another bug Hunt! This is done by the marvelous Lone Archivist (Primeval, Tidebreak, What We Give To Alien Gods).

Otherwise, things are looking good. COVID really took it out of me, but we’re getting back on track now. Early reports on the WOM from early readers have also been really good, I’m excited to get it in ya’ll’s hands.

Alan’s been doing some awesome RPG videos on our YouTube channel, so if you’re itching for more content, check it out here.

Thanks so much for all your support! We love reading your AAR’s in the discord and we’ve seen some awesome 3pp content come out as well. We can’t believe how amazing you’ve all made this experience.

Stay tuned for next time, and stay safe out there!

Getting a lot done this month at Mothership HQ. Here’s what we’ve been up to!

The Backerkit is still open and will remain so for a while. We’ll post another update before we run credit cards.

Speaking of BackerKit, we got a lot of confusion with the release of the Dead Planet WIP PDF I wanted to clear up.

First, a lot of you may have gotten double e-mails about the release. Setting up digital distribution for this big a project in BackerKit can be kinda wonky and I’ll admit I’m not an expert at it.

You can see here that there’s a few different “distribution rules” about who gets the Dead Planet PDF. If you ordered a print or PDF copy of Dead Planet you got one and if you ordered a copy of the Deluxe Set (which is also included in the Megabundle) you got one. There’s some overlap there occasionally with how the items are set up in BackerKit, so you might get two e-mails. This is normal, the files aren’t different. Hopefully we’ll clear that up in the future, but if it happens again with A Pound of Flesh, just roll with it.

If you’re still confused, please email us. We continue to do our best to be responsive and active in the comments. Unfortunately, we can’t always get to them. We appreciate your patience and want to remind you; if you have a question you need an answer to, please email support@tuesdayknightgames.com.

Last but not least, thanks again for being our backers and general fans of Mothership. We really appreciate your continued enthusiasm, patience, and support. If you’re itching for more Mothership content in a bite-sized bit, you can always check our YouTube channel. This last week Alan did a sweet video on designing violent encounters, I highly recommend you check it out!

Here's a few screenshots from the work we've been doing for the Warden's Operations Manual and the Player's Survival Guide.

It’s been an exciting month here at Mothership HQ. Here’s what’s going on in the motherverse!

Another Bug Hunt will contain somewhere between 4-5 one shot adventures that string together to create a nice short campaign. Three of these adventures (by Luke Gearing, Alan Gerding, and DG Chapman) have had their first drafts completed and are in playtesting now. Layout development has started as well and we’re excited to show you some example spreads in the next update.

We continue to do our best to be responsive and active in the comments. Unfortunately, we can’t always get to them. We appreciate your patience and want to remind you; if you have a question you need an answer to, please email support@tuesdayknightgames.com.

Otherwise, good luck out there in the void!

Hope everyone had a good holiday. We’ve gotten some great feedback on the WIP PSG, which is here if you missed it. Some great play reports on our discord, we love hearing that the updates have resonated so well with so many of you. A big thing we’re hearing over and over is that the game (and violence in particular) is much, much more streamlined and easy to play than 0e. This is great news. We’ve also found some spots that are a little sticky for some players (Shore Leave, the terminology around Wounds) so we’ve been able to look into that as well. We love to see it.

We’ll be releasing the Backerkit to everyone shortly (in 1-2 days, just waiting on final approval), so check your e-mail inbox for an e-mail from Backerkit later this week. What is Backerkit exactly? Basically it’s a service that allows you to upgrade your pledge or add “add-ons'' for some extra money. A few things you need to know:

Let’s break that last one down a bit because it’s important:

Some other questions that we got from the smoke screen test:

If we haven’t made it clear before, Mothership is supported by the best third-party publishers in the world. Seriously. We’ve got such an amazing fan base of independent creators making such amazing books. Right now there are some amazing Mothership third-party books on Kickstarter you should check out if you have the chance.

First up is Hull Breach: https://www.kickstarter.com/projects/yusem/hull-breach-vol-1

This one is insane, they’ve raised over $400k and they have a little less than 24 hours to go. It’s hardcover, it’s over 200 pages, it’s got insane stretch goals and a huge host of some of our best third party creators contributing to this fantastic anthology. Check it out before it’s too late!

That’s all for now! We’re working on the 1e updated version of Dead Planet now and progress is going great on all the writing, art, and layout for the other books. We’ll check back in soon with another update going over progress for each piece of the puzzle.

If you have a Mothership 3pp hitting kickstarter (or any other funding platform) this month, reach out to us and let us know so we can tell people about you!

We will be distributing these files again through Backerkit, but not until early January. Why? Well Backerkit’s customer support team is on holiday until then. But we didn’t want you to wait, so y’all have the link now.

Additionally, surveys (for most people) won’t be going out for another couple of weeks. We’re going to wait until Backerkit customer support is back online in case there are a lot of questions or any issues.

We’ll send out a bigger update in January (when Backerkit is available). This bigger update will address questions/concerns we’ve seen with the few surveys that have already gone out. In the meantime, please enjoy the above link! We never distributed a link like this to fifteen thousand people before and we are pretty excited for you to get your hands on it. If there are any issues, we will continue to do our best to address them as soon as we can.

We really appreciate your enthusiasm and patience. Until next time, we hope you enjoy!